With a brand new blog in the works and a stack of great posts waiting to be released, Scott from TestLodge got in touch with Studio Raygun to create a number of illustrations to accompany the TestLodge articles.

As an illustrator, it is my job to create engaging visuals that both support and explain the accompanying text. A successful piece carefully adds some visual flair to the page whilst clearly communicating the article’s core idea to the reader.

These spot illustrations are an exercise in creative problem solving, and working closely with Scott, I was able to produce a number of illustrations that could be used both within the articles and as graphics to promote them via social media.

Every illustration I do is different, but I tend to follow a simple process that I have refined over the years:

The first step is obvious – read and understand the article. Sometimes an article headline can be enough to give you a good idea of what to do, what message to portray, and even some early visual concepts. However it is always best to read though the article and see if there are any nuanced visual metaphors or clever graphical elements hiding in the text that you can pull out and use within the illustration.

I also like to know the context in which the illustration will be used and who the readership is, along with the bigger brand picture – are there any other brand assets, colours, shapes and graphical elements that I can use and expand upon? This ensures the illustrations work as part of the brand.

Once I’ve identified any visual metaphors that could be used to get the point across, I produce some quick thumbnail sketches. These sketches, usually on a Post-it note or as a quick digital drawing are used simply to show my thinking, I’m not too focussed on the quality of the drawing at this point, they help me quickly to get the idea out of my head and onto paper, and to see how the composition of the elements will sit on the page.

The illustration can be as abstract or literal as you see fit. Sometimes a subject matter simply can’t be anything other than a direct representation of ‘the thing’ itself, but in some instances you’re more free to explore ideas surrounding the subject and come up with a novel approach that can cleverly allude to the concept without needing to labour the point.

Once I’m happy with the sketch I send this on for feedback and approval, along with a brief explanation of my ideas if needed.

I primarily work in Adobe Illustrator, it’s an incredibly powerful tool and works well with my style of illustration.

At this point I have a good idea of the style in mind, based on my sketches and also knowing the type of audience readership the article is aimed at.

I work up the illustration to completion; blocking out the overall shapes before applying colours, tweaking as I go. Once the overall scene is illustrated I refine and add depth and texture with a subtle grain gradient.

Once I’m happy with the illustration I send this on for feedback and approval.

Depending on the usage of the illustration, in this case a digital publication, I export the file ready to be used at the agreed-upon size and file type.

Will Saunders (@willsBrain) is a designer and illustrator at Studio Raygun, and Beacon. 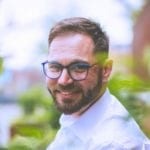 How our Users’ Mindset shaped the New Interface We're pleased to introduce the brand new interface for TestLodge. Let’s take a look at the new site structure and navigation.

The Making of the Latest TestLodge Explainer Video We recently worked with the video production company Storm & Shelter to produce a new explainer video, here's how we got on.