There are many different terms and phrases heard in software testing. From numerous testing methods to various metrics and components that make up a software test, it can be hard to remember what each term means. For example, what’s the difference between a test case and a test scenario?

When preparing to test a website or piece of software, dedicating enough time and careful thought at the planning stage brings benefits later on. Test scenarios and test cases are part of this early stage because they enable a logical progression path to be created, leading to a successfully examined project.

For a brief definition, test scenarios categorize the sections for testing, and the test cases listed beneath each test scenario, provide the steps a tester needs to follow to test each part of the area efficiently. 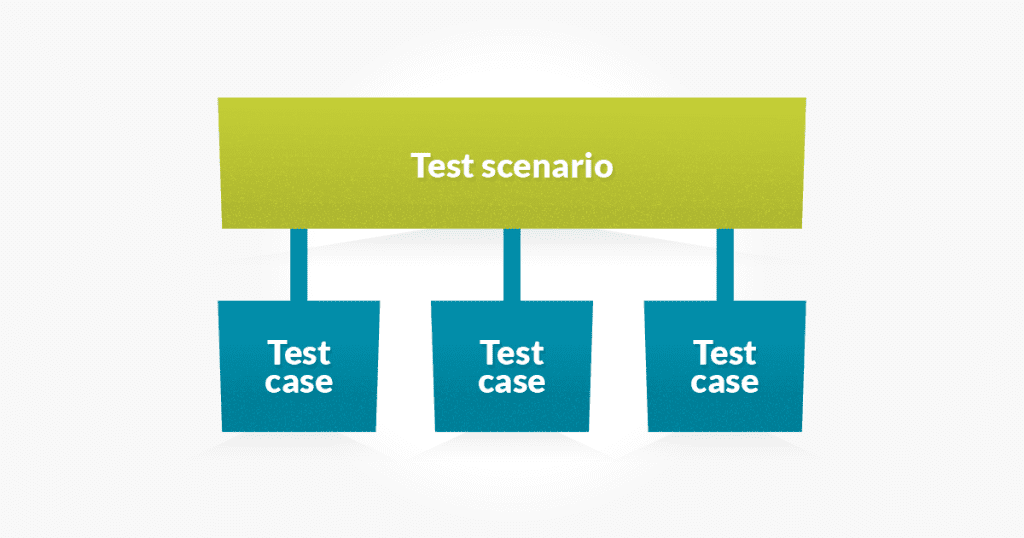 Let’s take a closer look at the difference between a test case and a test scenario.

Test scenarios give structure to a testing project. Isolating the areas to be tested, then breaking them down into more detailed subsections, creates a framework for comprehensive and successful product testing. Test scenarios are high-level documentation because they contain an overview of what needs to be assessed. They serve as a route map for the product’s software testing journey. The source data can come from a range of documents such as use-cases, designs and business/system requirement specifications, and other planning documents.

Test scenarios are selected then written ahead of test cases because they will influence the choice of which tests to run. Although individual scenarios are expressed as a single, short sentence, each one forms part of the larger project of examining the end-to-end functionality of a software application or website to ensure the business processes and flows perform as expected.

To write useful test scenarios, the author needs to know how the item should function in the real world so they can operate it as a user might, following release. Evident assumptions such as, will they know how to turn it on, or access the site, need to be included. At the other end of the user experience spectrum, scenarios should instruct testers to discover how the site or software responds to software crashes or “404 – page not found” situations. (With the latter, it’s necessary to include a test scenario to check that an on-brand and user-friendly 404 message is already in place to respond to a broken link.)

Once test scenarios have been written that detail the different functionality for testing, the next step is to write test cases, which are the itemized lists of instructions for conducting tests.

Test cases are defined as low-level documentation because they are written in response to directive test scenarios and are plans of action for exploring an app or website’s working details. A test case is a set of steps that validate the scenario. Whereas test scenarios derive from use-cases, test cases come from the test scenarios.

Usually, multiple test cases are associated with a single test scenario because they contain the testing details, which enable the tester to validate all the requirements. To learn how to write test cases, read our test case tutorial for beginners.

Of the numerous areas of a website to test, the login scenario will be a feature for many. The following example of a test scenario and connected test cases is typical:

So, What is the Difference Between a Test Case and a Test Scenario?

As we have seen, both test cases and test scenarios have a lot in common. They are members of the same team but perform different roles in enabling a software product to become as close to flawless as possible and ready for release. As with any command structure, the hierarchy flows from top to bottom. If scenarios and cases were company employees, test scenarios would be executive management, while test cases would be the skilled workforce who carry out the managerial instructions.

Working with Test Scenarios and Test Cases in TestLodge

If you want to file each test scenario separately when using TestLodge, there is a test suites section that you can use. In this case, you would create a new Test Suite and include each scenario case within it, which allows you to group test cases on a per-scenario basis. So, using the example above, the Test Suite would be “Validate the login page,” and each test case would live under it.

Both test cases and test scenarios are significant ingredients in software testing. While they are closely related, both have advantages and disadvantages. For example, the extreme level of detail in test cases is essential when working with testers off-site. In a time-sensitive situation where you may not have time to write detailed test cases, a test scenario may be sufficient. Using both test scenarios and test cases together will ensure a robust, high-coverage testing initiative.