What is Continuous Integration Testing?

Continuous Integration (CI) is an approach within software development in which the developer pushes code into a repository, such as Git or SVN, several times daily during the development phase. Each push is followed by a build, which will then be automated using a set of tools and will also most probably have a set of automated tests run against the build. This will ensure new changes are well integrated into the project code base so any problems can be found very early. How Continuous Integration is Done?

There are tools available (both licensed and open source) for you to set up CI with your own project. Some commonly used tools are Visual Studio Team Services, TeamCity, Jenkins, and CruiseControl. Using CI tools, simultaneous builds can be run on multiple platforms. Some licensed tools come with the option of ‘on the fly’ test result reporting plus state of the art test reordering. These tools also support multiple technologies and platforms, such as Java, .NET, PHP and others, and support the creation of better quality code by finding duplicates within the code. 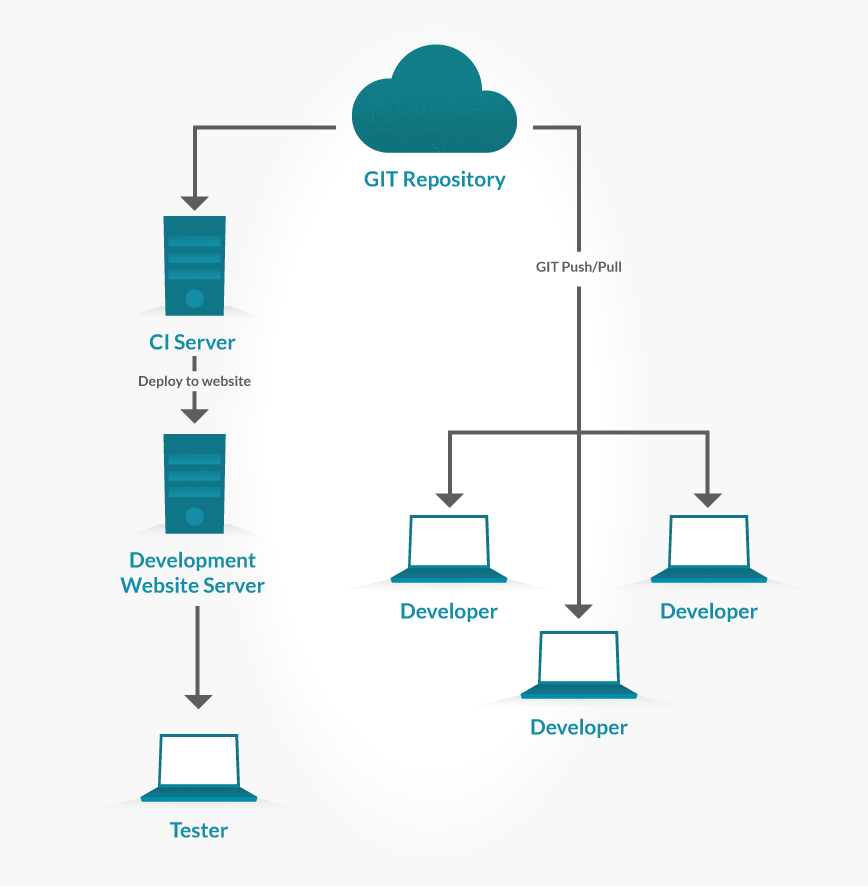 Most CI tools act as both continuous integration server and deployment server. Once initiated, they can build your solution, run unit as well as functional tests, and automatically deploy your application to a server. Some of the benefits of CI are:

Build Agents:
The build agent is responsible for executing the automated build process. It’s not essential that both build agent and build server are installed on the same OS (build server and build agent can work individually on separate machines). You can set up as many build agents as you want (or as your CI tool license permits), and each can run on separate platforms, on which you want to build your software project.

Build Project:
This is a working project that is set up on the CI tool for software that is under development, and on which build automation is planned. It is basically a set of configurations for your build.

Build Configuration:
Build configuration is a basic range of settings for the build process, such as build source path, build step and build trigger, which will be discussed below.

Build Source path:
This refers to the version control URL and its credentials, that will define how the tool should communicate to this version control system, so it can monitor code changes and fetch the source for your build.

Build step:
This represents a task in a build process. Build steps are carried out by the build runner, which provisions the integration with specific build tools (like Ant, Maven, MSBuild etc.) or testing frameworks (TestNG, NUnit etc.). Therefore, in each build you will be able to run several tasks (build steps) which will invoke testing tools (TestNG, for example), build tools and any specific commands such as batch or powershell, sequentially.

Build trigger:
This is a rule that invokes a build process. For example, you can set when you actually want to trigger the build process, such as whenever there is a commit to the code repo, or scheduled builds like EOD every day, or twice a week, for example.

Build Queue:
These are a set of build jobs that are waiting to be executed, one after the other.

Build Artefact:
These are the output files that are available for download, once the build process is complete. For example log files, JAR etc.

The below steps show how CI works in order to run an automated build process:

Every tester and organisation will favour different tools depending on their requirements and the size of budget they have available. To help you decide, we’ve put together our list of the top continuous integration tools currently available. We've researched the existing CI tools that are available today and have put together our top continuous integration tools list.